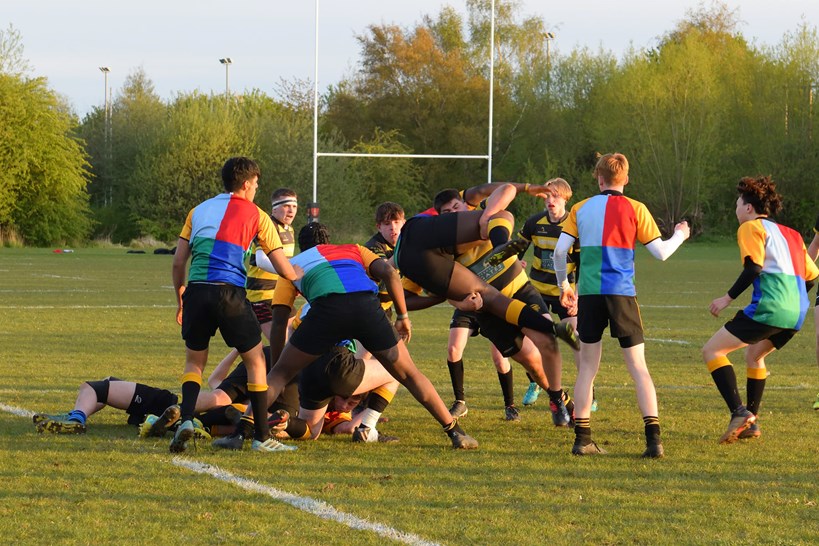 Wallingford were able to field a squad of 25 players, made up of mostly U17s and a handful of U18s and playing up U16s, a reflection of the commitment by the players over the last 12 months.

In a game of four quarters using the new adapted laws (no scrums, mauls, etc.) the opening exchanges were unsurprisingly frantic as both side competed fiercely at every breakdown and some massive hits went in from both sides in defence.

Wallingford created several half chances as Angus Nelson and Nathan Gibbin looked dangerous in the outside channels, but it was Oratory who made the most of their chances, as they crossed for three well taken tries that Wallingford will have felt that they could have kept out.

The second quarter saw Wallingford work their way back into the game and were unlucky not to score a try. First up, a lightning snipe from Tom Perrott at scrum-half saw him chip the ball over the last defender, only for an unfavourable bounce to deny him, and then Will Newing had a try disallowed as he was deemed to have to have nudged his opponent as he went to field a cross-field kick from Matt Jarvis.

Wallingford did finally get on the scoreboard with a well struck 40m penalty from Jarvis, before the prominent Tyler Harvey knocked when grounding the ball after driving over from short range.

The second half saw both teams lose players to injuries, as the hits continued to fly in, as both sides refused to take a backwards step. The thorn in the Wallingford side throughout was their handling – every time they made a good break, inevitably a knock on or rip in contact scuppered any momentum.

After no points were scored in the third quarter, the final quarter saw Wallingford desperate to cross the whitewash as reward for their endeavours, but fierce Oratory tackling and Wallingford errors limited their chances, as Oratory closed the game out with three more tries.

Wallingford were obviously frustrated with the result, but they were pragmatic about the match overall – their opponents have been training together every day since schools went back and have already played two matches, so they were always going to be well drilled and match ready.

Given that, the fact that Wallingford were able to push them right up till the end was testament to how far they’ve come as individuals and as team over the last 9 months.

There were plenty of positives to take from the game, with the defence excellent throughout, the U16s all making big impacts off the bench, and the work-rate and commitment not fading throughout the match.

All in all an excellent start to what should be a fun 12 months for this group of players.

My man of the match went to U16 Oscar Ianson, whose carrying, offloading and tackling made a huge impact coming off the bench, with honourable mentions for Finlay Harrison, Aaron Toolin, Tyler Harvey and Hector Jameson.

Match Photos can been seen via the below link: