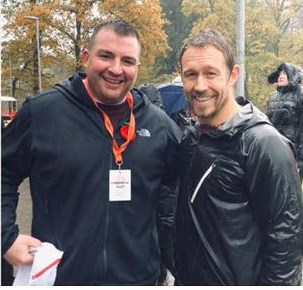 Next up on the 'All Time WRFC XV' feature, the most successful captain in the history of the club and general club legend, Kris 'Bungle Fever' Blaszko.

Monk was a great character to have in your team, he would spend 70 minutes (loved a yellow card) tackling like a mad man. Great in the tight, loose as a goose, loves a Tour.

Hope to see him back in the Amber & Black soon.

Not the biggest hooker the club has ever seen but boy did he make up for it. Fast feet, good hands, great wit and bloody gorgeous too.

One of the illustrious 200 club in this team.

A tough old school scrummager who imparted his wisdom on the likes of myself and Ed Jenkins when we started playing. A great bloke on and off the pitch who loved a sing song and a drink after the match. Taken from this world far too young.

A fierce competitor. Never missed a tackle, great in the line out and one of the nicest blokes the club has ever seen. A real fan of the game who knows his stuff.

The mountain of a man was a guy you wanted in your team. He could change a game with one of his ‘hits’. At 6ft 10’ he towered over most and never had a bad game.

Back in my day he was in the back row and we often played alongside each other. A fantastic player to have on the pitch, hard working, aggressive and a real work horse. A bloke you’d want in the trenches with you.

Could probably play anywhere on the park and picked up far too many man of the match awards to remember. More often than not he shone in the back row, scoring tries and running riot.

A Goliath at the back of the scrum and a bloke who always wanted to win. His ability to break a tackle and stay on his feet was often unbelievable. Had stamina for days and was in the victorious Oxfordshire team at Twickenham.

There was nothing better than watching Derek chase a man down and tap tackle him in full flight just short of the line. He was crucial to the clubs success in the 2000’s and would often be the first name on a team sheet. My mums favourite player.

He had it all and won many games for Wallingford over the years. Very competitive on match day and wouldn’t take a backwards step. Would be the ideal fly half if he liked Port, he doesn’t.

A versatile flyer that could have played anywhere along the back line. Fast enough for the wing, skilful enough for fly half, clever enough for full back.

A rock in the centres. ‘Lloydy’ was absolute class, a fantastic pass, good speed, great hands, I could go on all day. He loved a beer with the lads as well and introduced the drinking game ‘crows’.

One of Wallingford’s thin blue line contingent that we unfortunately lost when the job took him elsewhere.

The most balanced, graceful runner of the ball I have ever seen. He could quite simply win you games and it was so easy to play alongside him. A lovely bloke who instilled the winning mentality in anyone he played with.

Couldn’t kick for toffee but he didn’t need to. The Wallingford gas man for several seasons, he was electric on the wing and had a great strike rate. Would of been a 10/10 if it wasn’t for the Andy Goode style gloves.

What a character! A stalwart in the 15 shirt for many seasons. Scored a bucket load of tries and probably set up a few hundred more. Can still be seen gracing the odd vets game, long may it continue.