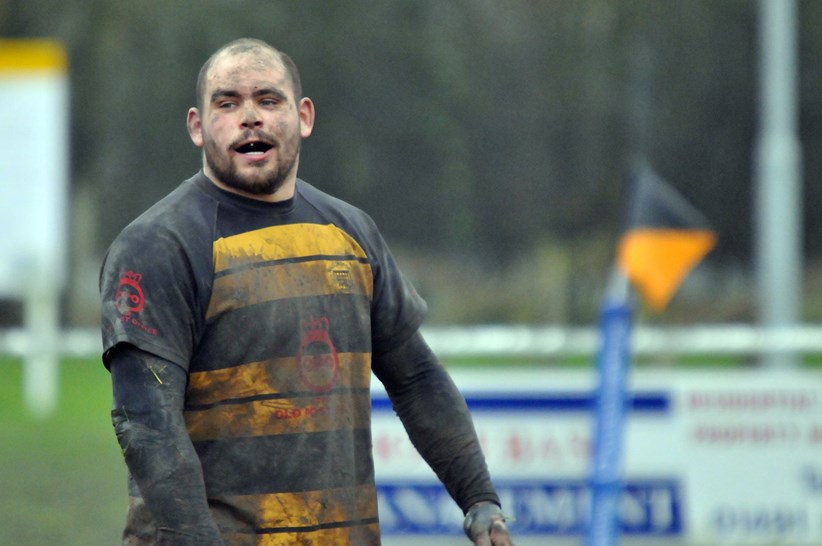 Wallingford welcomed Reading Abbey to the ‘Croft on a blustery day. It was another massive game for Wallingford, following on from the previous weeks win over Wimbourne, with Abbey only two places above Wallingford.

In selection, Tom Rowberry joined Mike Turner in the second row, Kris Blaszko moved to hooker with Monk coming in to prop to form a formidable front row alongside Ed Jenkins. With the backs ravaged with injury and unavailability, Phil Kelly returned to the centre and Ciaran Farmer and the returning Dan Stalker came on to the wings.

Wallingford went into the game knowing they had the advantage in the forwards, but they had a busy day keeping tabs on the dangerous Abbey backs. The game started at a lively pace, with the Abbey forwards making good yards in the early stages, and Wallingford had defend well to prevent an early score. Having weathered the initial storm, and a missed penalty, Wallingford began to get a foothold in the game, with the forwards looking dominant in the set-piece.

The backs also looked dangerous, with Smith making several breaks from full-back, but poor distribution ended these chances. The first half-hour was an even battle, with the Abbey flankers causing havoc at the breakdown as Wallingford attackers found themselves isolated too often. Regardless, Wallingford still edged possession, but they soon committed rugby suicide, as Venners looked to distribute the ball wide, and their nippy fly-half easily read it and ran in from half way for a converted try.

Stunned by the try, Wallingford looked to strike back, and found themselves on the visitors twenty-two with an attacking scrum. But again a promising position turned into another Abbey score, as the ball popped out of the back of the scrum and the scrum half popped the ball to the backs, who moved the ball quickly to their outside centre, who ran it up the pitch. Smith came across to make the tackle but the Abbey support flooded forward and after several off-loads, dotted down under the posts for a converted try to end the half.

To make matters worse for Wallingford, Henry Venners suffered a nasty facial injury in the build up to the Abbey try, and had to be taken to hospital. With no backs subs, Marcus Wiltshire came on at outside centre, and Smith moved to fly-half.

14-nil down with a makeshift backline, and the Abbey backs more likely to come into the game, Wallingford had a huge mountain to climb. But their forwards domination of their counterparts increased, and this secured plenty of ball for the backs. Abbey still looked dangerous, and almost made Wallingford pay for some wayward kicks as their back three ran it back with interest, but the home side just about kept them out.

Wallingford finally got the try they deserved, after they disrupted an Abbey scrum, Dearlove smartly fed Holton who showed good hands to get the ball to Smith who dived over in the corner, and was able to pick himself up and converted from the touchline, much to the joy of the not-at-all-inebriated VPs on the sideline.

From then on it, it was all Wallingford, and to be more precise, the Wallingford forwards. With the likes of Turner, Blaszko and the excellent Jeffreys carrying the ball, the home side were beginning to make real inroads into the visitors defence, and as a result Abbey began to infringe at the breakdown and scrums. The all important second try came from a scrum, as the home pack rumbled over the line for scrum-half Dearlove to drop on the ball just before Jeffreys. Smith converted the try via the left post to make the scores level.

Wallingford flooded forward again, with Holton linking well with Smith with the one move Smith was capable of executing, and making good yards.

With the Abbey pack struggling, Wallingford soon scored again. After Dorian Jenkins was held up over the line, Wallingford scored from a driving maul, Kris Blaszko touching down.

With ten minutes to go, Abbey looked to get back into the game, but the Wallingford forwards were surprisingly still full of energy, and earned several penalties, which Blaszko found several excellent touches with. With minutes to go, Abbey won a scrum in their twenty-two, but it went against the head, and the forwards proceeded to force the scrum over the line for a try for Ian Jeffreys, which was the all important bonus point try. Smith’s conversion ended the game.

This was one of the most satisfying performances from Wallingford for a long time. Abbey have taken many a side close this season, emphasised by the fact that they have more bonus points than any other side, but after the initial hiccups in the first half, Wallingford were truly dominant, not only did they completely dominate up-front, which was expected, but the backs held their own, making good yards themselves and limiting the opposition backs to only a handful of dangerous moments.