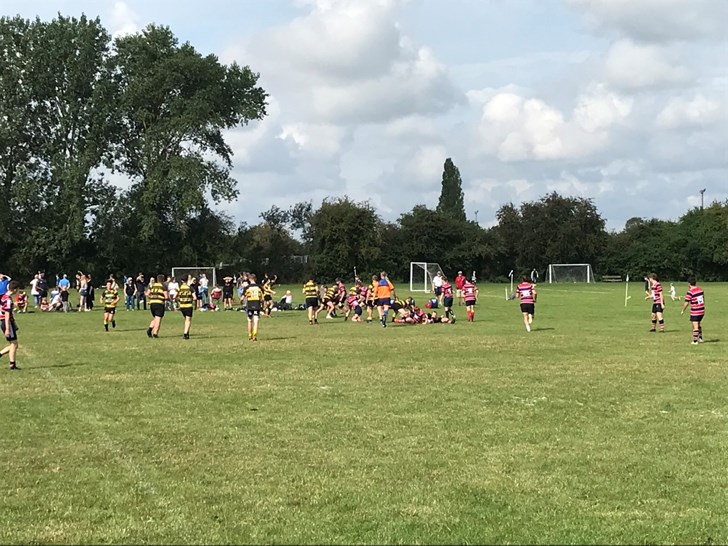 The Senior Development Squad (SDS) travelled to Grove for a pre-season friendly on a warm Sunday morning looking to build on a promising end to the truncated 2020-21 season.

The squad was bereft of a raft of regulars due to injury, DoE and school matches, but were still able to take a squad of 16. On arrival, it transpired that Grove were light on numbers, so it was agreed that the game would be 13 a side with uncontested scrums.

Wallingford started the game brightly, and played some decent structured rugby early on, and soon earnt a penalty for Grove going in off their feet at the breakdown. Jack Earl kicked deep into the Grove twenty-two, and from the ensuing catch and drive, hooker Isaac Hall touched down for the first score of the season. Conversion missed.

With Grove falling foul of the ref on numerous occasions in the opening quarter, Wallingford continued to dominate territory and possession, with the forwards carrying well in the tight, and the backs, with new fly-half Alister Marsden releasing the backs to great effect.

The next try came after ten minutes, when Billy McMullet picked from a scrum and powered over from 10 meters. Conversion missed.

And the final act of the 15 minute quarter saw a third try for the visitors, as a Grove over-throw in their own twenty-two saw McDermott charge over for his second. Conversion missed.

Grove were struggling to contain Wallingford’s runners, in particular captain Finlay Harrison and McDermott, and it was this combination who combined to put Will Newing in space on half-way and the winger showed good strength and speed to sprint in for a converted try.

Somewhat shell-shocked, Grove finally started to get back into the game as Wallingford began to infringe and lose their shape a little.

The first half ended 24-0 to Wallingford.

Wallingford again started the half strongly, and after Grove had infringed again, Harrison took a quick tap. The ball found its way to JJ Brown, who despite having a queue of teammates outside him, decided to go for the line himself and fortunately he barged his way over for an unconverted try.

From that point on, Grove showed great character in fighting their way back into the game. Looking to move the ball wide early, Wallingford were caught napping as they allowed the Grove left winger to score a soft, albeit well taken try.

With the visitors starting to lose their structure and patience, they turned the ball over too many times in the second half, allowing Grove plenty of possession, and although the Wallingford defence generally stood up well, Grove managed to pick up two further scores from Wallingford mistakes, as the game ended 27-19.

This was a decent run out for the SDS. The work they’ve put in at training around the breakdown, line-out and structure was clearly in evidence, as they dominated the first half.

The lads were disappointed with the tries they conceded, but these are things we can easily address at training, and if we can build upon this performance, it should start coming together nicely for the rest of the season.

There were plenty of strong performances, with Billy and Finlay showing their class throughout, Felix C looked solid at 15 on his SDS debut, Jack and Tom P provided excellent service from 9, and Alister Marsden put in an accomplished display on his first run out at 10.

But man-of-the-match went to Harvey Miller, who put in an energetic display, carrying well and being a nuisance in defence, reflecting his massive improvement over the last 12 months.

Next game is the league opener on the 26th September, again away at Grove.