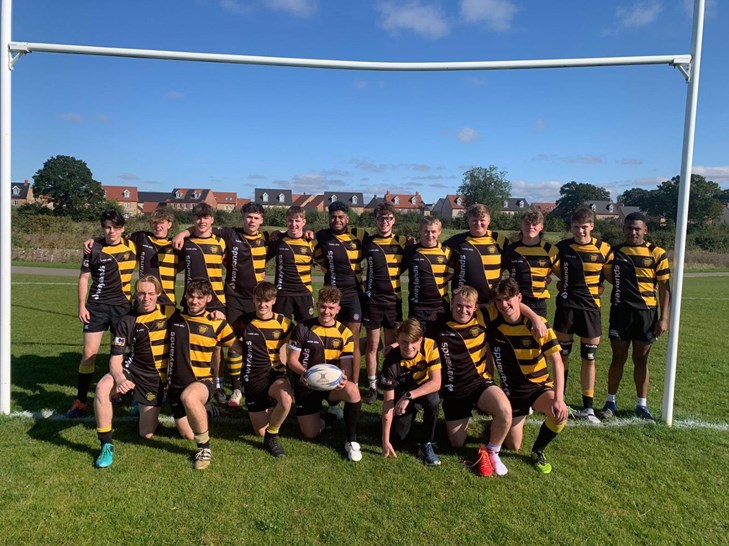 The Senior Development Squad travelled up the A34 to the new home of Bicester Rugby Club on a beautiful Sunday afternoon for their second league outing of the season.

In selection, Wallingford were forced into a handful of changes, as Johnson Rabuka made his SDS debut in the place of isolating Alfred Bumpass, Will Newing came in for the injured Nathan Gibbin and Harvey Miller returned to the pack in the place of the absent Theau Seabrook. Whilst on the bench, there were SDS debuts for Barney Newing, Neori Vuetiyaroi and Ben Holland, and it was good to see Sam Waugh back in the fold for his seasonal bow.

Facing a much heavier opposition than the previous week against Grove, Wallingford made an electric start, as a deep kick was fielded by Will Newing, who waltzed through the Bicester defence before offloading to the supporting Billy McMullet who ran in for an early score.

Newing soon repeated the feat, this time after fielding a missed touch finder, he put his dancing feet to good use to beat three men before running in for an excellent solo effort. Both conversions were missed.

After a strong start, ill-discipline at the breakdown began to let Bicester back into the game, as they looked to use their big ball carriers to crash the ball up. But Wallingford’s defence stood up to the barrage, as the likes of Matt Purnell, JJ Brown and Silas Allum put in some big hits to repel the home side.

In contrast, Bicester were guilty of tackling too high, as Wallingford consistently broke the first tackle, with McDermott, JJ Brown and Johnson Rabuka prominent in attack. But it was the somewhat less celebrated ball carrying of Harvey ‘Goggles’ Miller, who showed incredible power in running over several would-be tacklers before dotting down. (you got your mention Harvey, you can stop talking about it now)

The next score was a slightly less glamourous affair, as Billy McDermott scored his third successive try double following some patient work by the forwards on the Bicester line.

The final score of the half deservedly went to fly half Alister Marsden, whose open play running had already caused the hosts problems, before he got on the end of an excellent break by the impressive Silas Allum before racing in from 30m.

The second half saw a raft of changes, which inevitably led to a drop off in team cohesion in the third quarter, as the scores dried up.

But despite the number of new combinations, Wallingford still created chances, and were to score next, after Barney Newing put captain Finlay Harrison in to a gap, and the captain showed great strength to go over from 25m.

Good hands in the backs put the rapid Toby Bucknell in space on the right, and he promptly raced in for the team’s seventh score.

Bicester never gave up, and did manage to take advantage of a disorganised Wallingford defence to go over on the left for a consolation score.

There was another score for Bucknell in somewhat chaotic scenes, as Matt Purnell had a nasty looking neck injury from a scrum, but as the sideline tended to the prone prop, play went on and Bucknell scored in the corner.

The final score of the game was created by the excellent JJ Brown, who broke threw in midfield, taking play up to the Bicester line, before offloading to the supporting Max Lecky-Thompson who dotted down for a well taken try.

This was a fine performance from Wallingford, and the second time they’ve surpassed a half century of points in successive matches. Bicester were a different kind of proposition to previous opponents, who brought a power game that Wallingford had to adapt to deal with.

In defence, Wallingford handled the big runners well, and limited Bicester to few scoring opportunities, whilst in attack, they moved the ball well against a tiring defence and were largely clinical in finishing off the opportunities that they created.

Every single player contributed to the performance, with Silas, JJ, Alister and Will having fine games, and all of the players coming off the bench slotting in well, but Man of the Match went to Matt Purnell. Against a team of big runners, Matt showed his class putting in a number of big hits and carries, as he didn’t allow Bicester to bully Wallingford. Fortunately his injury doesn’t seem as serious as first thought, so hopefully he’ll be back on the pitch soon.