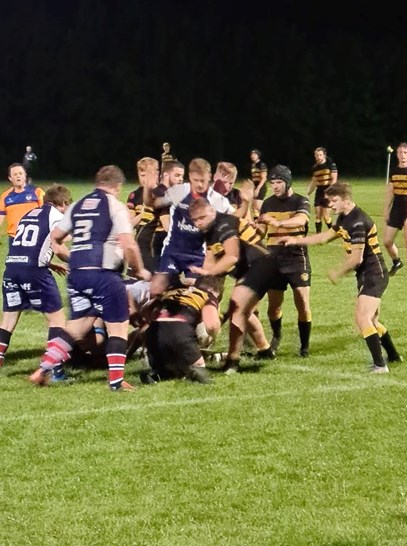 Wallingford welcomed local rivals Grove to the Hithercroft for a Friday night fixture under the lights for their first proper match since March 2020.

Both sides were missing regulars, as new Head Coach Henry Day selected a strong starting XV to take on a Grove side that play in the league above Wallingford currently. There was the long-awaited debut of new centre Tom Cerullo, as well as the unexpected return of club legend Kris Blaszko to the front row, in the absence of a number of front row regulars.

With players and spectators equally excited about finally seeing senior rugby back at the Hithercroft, it was Wallingford who dominated the opening exchanges, with both backs and forwards standing up well against a thick set Grove side.

Their early dominance was rewarded with the opening score, as the pack executed a clinical catch and drive to drive over from 15 yards, with captain James Norris coming up with the ball.

Ill-discipline then let Grove back into the game, as they enjoyed their own purple patch, from which they took the lead when a clever play around a ruck allowed their hooker to walk in untouched from five yards for a converted try.

Wallingford came back, and created several chances through the backs, with a flowing move down the left almost resulting in an excellent team try, before another catch up drive resulted in a second try for James Norris.

The first half ended 12-7 to Wallingford.

The second half was a much more even affair, as the game broke down somewhat and Grove began to apply pressure on the hosts, mainly at scrum time.

After a tight start to the half, Wallingford’s structured attack slowly worked its way into the Grove twenty-two, and from there, the impressive Nathan Chapman showed good feet to dart over from five yards.

Lightning struck twice soon after as the Grove hooker somehow again strolled under the posts untouched, as Wallingford’s tight defence was caught napping.

The half was developing an end-to-end nature, as Wallingford then worked their way back into the Grove half, and after some patient build up play, Charles Campbell took the ball on the right and found Matt Fearn out wide who sprinted in from 10 meters.

It was Grove’s turn to score next, as their centre somehow found space in midfield, albeit via a very forward looking pass, to crash through from 25 meters as Grove kept in touch with the hosts.

To ease the nerves, Wallingford scored their final try with 10 minutes to go, as the ball found its way to Sam Botting 30 meters outs, and he showed great feet and speed to slalom his way through to score on the right for an excellent solo try.

Grove scored one more towards the end to set up a tight finish, but strong defence from the hosts, including a crowd-pleasing diving tackle from Rico Cleophas, saw the hosts close the game out, 33-28 (I think).

This was a cracking game of rugby considering how much time the players have spent away from contact rugby, with both sets of players and fans contributing to an enjoyable evening of rugby at the Hithercroft.

There were several fine displays, with the new half back pairing of Jack Payne and Charles Campbell working well and the new centre partnership of Tom Cerullo and Sam Botting looking solid, whilst across the board the pack put in a powerful, combative display.

A very promising start to Henry Day’s coaching tenure, next up is another local derby as Wallingford welcome Didcot to the Hithercroft on the 4th September.