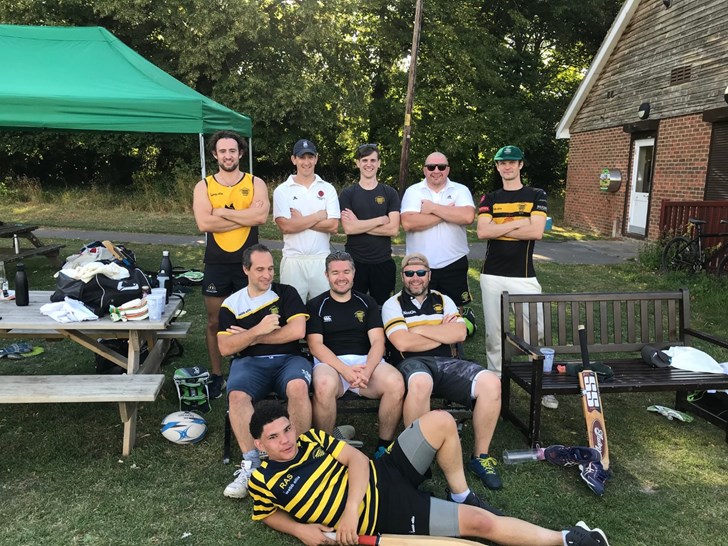 Wallingford Rugby Football Club Cricket Club picked up the first silverware of the season as they clinched the inaugural Aston Eights cricket tournament.

On a lovely day for cricket, a WRFCCC side made up of Tom Swainston, Ed Poulding, Rico Cleophas, Ben Warren, Dave Baxter, Tom Cerullo, Ralph Smith, Bungle and Brett Parsons, joined sides from Aston Tirrold, Aston Upthorpe and the Rest of the World, to take part in a 8-a-side cricket tournament over at Aston Tirrold Rec.

After steamrolling former WRFC 2nd XV captain Dan White's Upthorpe side in the first game (bowled out for 17 in less than five overs), dropped catches (no Tom names Swainton mentioned) in the second game against Tirrold resulted in defeat and a place in the final in the balance.

But a much improved display in the final group game against a Rest of the World side featuring Graham Sage, in which captain Ralph led a successful run chase, saw WRFCCC reach the final, in which they played Tirrold again.

Winning a crucial toss, a tight bowling display from the likes of Cerullo and Poulding restricted Tirrold to 45 off their 5 overs, and then Smith and Swainston made light work of the chase, their pre-season fitness clearly helping them with their running between the wickets.

It was an excellent squad effort, especially with the bowling, as the likes of Cerullo, Rico and Baxter were consistently economical, whilst player of the tournament went to Tom Swainston, who redeemed himself after the two costly drops earlier in the tournament by finishing as top run scorer with 58 undismissed runs over the four games.